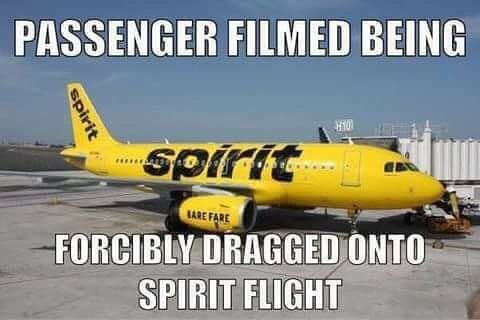 Let’s be honest, everybody THINKS they are too good to fly Spirit. But nobody (unless rich, wealthy, or otherwise financially free-spirited) is above flying Spirit.

The first time I flew Spirit was on a flight to Miami (I mean ummmm, Fort Lauderdale). The flight costs $60 round-trip (yes, you read that right)! It was during the week, a Thursday until Saturday. At that time I was working in a role where you could “work from home” pretty much when you wanted to unless you were new to the organization. I’d had a lot of goodwill built up with my boss so I decided I would work from what was then, my “home away from home” because I went to South Beach pretty often back then.

My plan was to go down on Thursday night, hang out that night, work Friday until I was done every that “had to be done” on Friday (aka “as soon as that last meeting was over”) and come back Saturday morning. And yes, I know what you’re thinking, “Who the hell leaves Miami on Saturday morning to come home?!” And the answer is, ME. And YOU TOO if you were in Miami trying to ball on a budget lol.

That context is important, especially the ballin’ on a budget part. Spirit Airlines is 100% for people trying to ball on a budget. Or at least get somewhere for the low and then ball out. I actually think that’s one of the GREAT things about Spirit Airlines, they have enabled thousands of people who probably wouldn’t otherwise have been able to fit a Caribbean or cross-country flight into their budget, the ability to travel to and enjoy some really amazing destinations both inside and outside of the country! I know you’re probably thinking “Who, if they saved money, couldn’t afford to go to Miami or one of the cheaper Caribbean islands?” And that’s a GREAT and valid point. But consider this:

I say all that to say, for those that fall into one of those categories above or straddle both, Spirit can help them save money on flight costs that they might not be able to afford if they went with another major and more established carrier. I mean think about it, even Southwest has been nudging their prices up over the past few years after they implemented no baggage fees. Nowadays, comparing prices on Southwest vs Spirit for the same dates and destination can shock you because Southwest might be $100+ more.

With all that said and because I have flown Spirit many times, I put together a couple lists for those considering or about to fly Spirit:

Things to know BEFORE you book:

Things to know AFTER you book:

Things to know AT THE AIRPORT:

At the end of the day, flying is not about the journey it’s about the destination! When you’re traveling for vacation (or mostly any other scenario) you usually aren’t concerned with the most lavish and luxurious experience getting there. You obviously don’t want a crappy experience and you want to arrive safely but remember that paying more for your transportation doesn’t get you there any earlier! So when you’re flying on an airline like Spirit just remember that you need to plan ahead based on the list above and set your expectations accordingly. If you do that, you might not hate the idea (or experience) of flying Spirit so much!